Cable grew up in Dallas, TX. Some of his earliest memories are of camping and fishing trips with his dad and brother. He credits his father an avid bass angler- for teaching him to appreciate and respect the beautiful resources that God has given us. Bird watching and identification was also a past time they 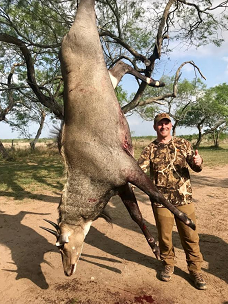 After graduating from Bishop Lynch High School, Cable went on to Baylor University where he began to study business. It didn’t take long for him to realize that sitting behind a desk in a suit and tie wasn’t for him. Being in the outdoors and talking sports were his true passion. He then changed his major to Radio Television and Film and transferred to the University of North Texas where he earned his BA while minoring in Social Sciences.

While at North Texas Cable began to work at Sports Radio 1310 The Ticket which opened the door for a position at a talk radio station in East Texas. Cable and his lovely wife Erin returned from their honeymoon, packed their bags and moved to Texarkana. His responsibilities at Amen 900 KPYN included broadcasting daily news and sportscasts, live play-by-play of area high school sports, hosting a weekly sports talk show and an outdoors show. After work he would often spend hours in the East Texas Piney Woods or fishing the vast waters of Lake Wright Patman.

Cable soon realized the thing that he loved the most about his job was hosting ‘The Piney Woods Outdoors Show’. Interviewing famous outdoor personalities, anglers, Texas Parks and Wildlife representatives, politicians, and Texas country music artists became his passion.

The goal of each broadcast was to provide an entertaining yet educational show for anyone who shares a passion for the great outdoors.

In September of 2009, Cable and Erin and their chocolate lab Maverick moved back to the Dallas/Fort Worth area, and in the fall of 2010 they added a chocolate female pup to the family
‘Belle’. The family expanded again on New Year’s Eve 2012 with the birth of their son Henry. In 2014, God blessed them again with identical twin girls, Frankie and Stella.

Cable’s passion to be spokesperson for the outdoor lifestyle didn’t end with the move back to the big city. With the government and organizations such as PETA and the HSUS continually making things more difficult for hunters and fishermen alike, Cable hopes to continue to be an advocate for sportsmen and women everywhere. This desire resulted in the creation of The Lone Star Outdoors Show. Hope you enjoy the show..