Mossberg’s Linda Powell is one of our oldest friends and subsequently a semi regular guest on the show. This spring, Linda and Mossberg came down to South Texas to chase longbeards with myself and my buddy Chisum Cooke. Mossberg also brought outdoor writer Gordy Krahn and the four of us sat down to for a visit after dinner one evening. The conversation and celebratory libations were flowing.

We talk Russian brown bear hunting, brittanys and grouse hunting in Gordy’s native Minnesota, our favorite moments chasing some of the most unintelligent gobblers on the planet, and the Mossberg’s new 940 Pro Turkey shotguns.

Next we spend some time with French gun and hunting enthusiast Baptiste Marchais who happened to be in Texas for a few weeks and decided to head over to the studio. We discuss France’s rich hunting tradition, their wildlife management system, gun ownership laws and perhaps most importantly, Baptiste tells Americans to take notice of what has happened in countries like his. There’s a reason why our government still has a healthy fear of it’s citizens unlike almost every single other country in the world.

Of course, we also talk cigars and recipes as well with our new friend. 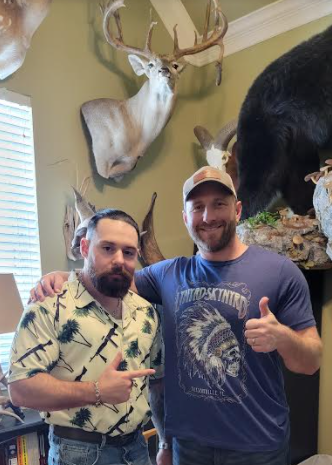